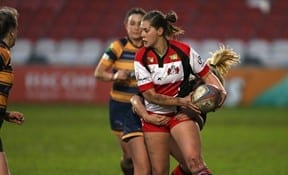 Prestbury Marketing have renewed their sponsorship of the Gloucester-Hartpury Women’s Rugby Club.

Established in 2014 the joint Gloucester-Hartpury Women’s side have previously won the Women’s National Junior Cup. They finished in second spot in National Championship Midlands Two in their first season in that league and their ultimate ambition is to compete in the Women’s Premiership.

Darren Stevens from Prestbury Marketing commented on the sponsorship:

“We are big supporters of local rugby and Gloucester Rugby in particular and this combined with our close association with Hartpury College made this an easy decision to renew our sponsorship. We think the team have a big future and we are pleased to play our own small part in supporting them. We look forward to following their success and wish them all the best for the forthcoming season”.

You can learn more about the Gloucester-Hartpury WRFC from their Facebook page.

Want to join the discussion?
Feel free to contribute!

Doing good is good for business
Scroll to top